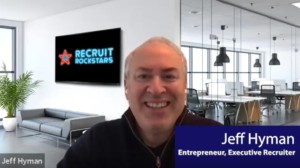 Jeff Hyman on Sales: Don’t “Show Up & Throw Up”

When Jeff Hyman speaks with salespeople, he sees a pattern that too many people fall into, one that not enough people recognize is hurting their business. A salesperson will approach him, and practically before he even opens his mouth, they’ll try selling him on a product or service by listing out all of the features, benefits, and pricing. He believes that this is one of the main reasons that salespeople struggle to close deals – as a professor at the Kellogg School of Management in Northwestern University, he has seen and written quite a bit on the topic.

In our featured interview, Joe Flanagan sits down with Jeff Hyman to discuss this phenomenon, which Hyman describes as “show up and throw up”.

Jeff Hyman says that in the 21st century he has seen a consistent theme. As business grows more complex, sales has become less transactional and more driven by relationships. Gone are the days of door to door encyclopedia salesmen whose livelihoods depended on a single good impression – today’s salespeople rely on technology to build relationships over longer sales cycles, with greater amounts of information to retain and convey to prospective customers.

While the environment may have shifted drastically, salespeople – particularly newer ones – rely on old tactics that don’t work on this new frontier. Whether it be a matter of nervousness, the desire to close deals, or even having the fiery temperament to simply be in sales, people take a brash approach where they focus so much on the sale – the features, the benefits, and the pricing – that they completely neglect the needs of the customer. At Acquirent, we refer to this as “talking our way out of a deal”.

During a meeting, a prospective buyer is interested in one thing above all others – solving their problem. A good salesperson must attune themselves to the needs of a client. We encourage our salespeople to do this through two of our five pillars – shutting up and listening, and asking good questions.

For instance, take our current COVID sales environment. For some companies, it has been disastrous – deals have dried up, and nobody is interested in buying a person’s services. Other companies have thrived in the pandemic – once niche products like Zoom have now become synonymous with video conferencing, and are doing better than ever. It’s brash to assume that any company is doing good or bad during this time without asking the important questions.

This might seem paradoxical at first. Why wouldn’t a salesperson want to put everything into selling a product right off the bat, rather than playing the long game? Jeff believes that a salesperson should really be like an advisor or a consultative problem solver – when they have a need for what you have to offer, they will come back when it is the right fit. Instead, many salespeople will “show up and throw up” – putting all of their effort into closing and losing a customer forever.

Joe is a big believer in asking the right questions to learn about a person’s unique challenges and needs (what we call active listening), the things that keep them up at night. But he’s the first to admit that when he started his career, he was a bit hot-headed and guilty of this same sales tactic until one of his mentors guided him on the right path. In fact, most salespeople start off this way. Jeff says this is understandable. People are excited about what they have to sell, and being wired this way is often a good sign of grit. But this needs to be balanced with a genuine curiosity and desire to learn.

Whether curiosity is something that can be taught or is baked into our sales DNA is a question in and of itself. But it is something we can all strive for, especially as we open up the new year.

At Acquirent, we are in the constant pursuit of honing and training our outsourced b2b sales team. How can you help us help you? Contact us today to learn more about our services.

What are the Best Days to Cold Call?

What are the best days and times to cold call? In the sales industry,…

How to Set Sales Goals for Yourself and Your Team

A B2B thought leadership is all about ideas, innovation, and goals – a strategy…